What Did You Think of Hallmark's "Romance in the Air?"

Summary:  A woman returns to where she used to spend her summers after learning her job is on the line, and there, she's reunited with her childhood friend. 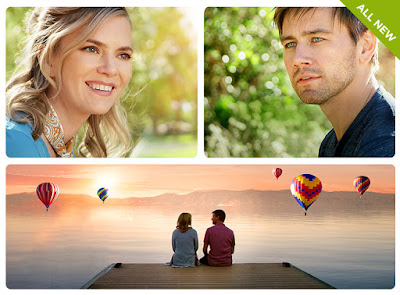 Do You Have a Summer Getaway?

If you're a country girl like me, it's probably hard to imagine spending every summer at Lake Tahoe, like Eden's family did.  We didn't have that kind of money, but we made just as many fun memories camping for one week every summer.
Do you have a favorite place you visit each year?  Maybe you make an annual trek to the beach or Disney World.  If you have a special place you return to regularly, be sure to share it in the comment section.
Eden is suprised to find Riley, her childhood friend, still living at Lake Tahoe, and they manage to quickly reconnect despite the number of years that have passed.

Eden is in marketing, but she's lost her enthusiam and edge.  She likes marketing, but she's not interested in the type of boring products her boss keeps assigning her to promote.
Riley isn't making any money with his hot air balloon business, until Eden works her marketing magic, but he loves what he's doing.
Think about your job for a minute.  Do you love what you do, or do you feel stuck?  Most of us like a sure thing, particularly a paycheck, but sometimes we need to do something new and differerent to keep growing.  Changing jobs can be risky.  Taking a chance on something more fulfilling requires a leap of faith.
If you're stuck in a rut, maybe it means you need be open to a new opportunity.

Kate is Eden's best friend, and she accompanies Eden to Lake Tahoe.  Instead of just spending girl time hanging out, Kate ends up on her own quite a bit as Eden ping pongs between Riley and her boyfriend, Michael.
Kate isn't a third wheel for too long though because Eden breaks up with Michael and hands him over to Kate.  Turns out, Michael and Kate have been attracted to each other this whole time, so Eden gives them her blessing. 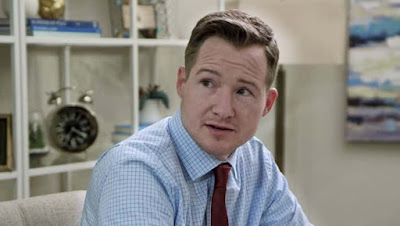 He's too much of a weiner to fight over anyway.
In real life, that doesn't happen.  Outside of Hallmark land, this would have led to the demise of Eden and Kate's friendship.  They would have blocked each other on social media and never spoken to each other again.  Their mutual acquaintances would have to pick sides.  Imagine if divorces were this amicable!
Did you notice how many milkshakes everyone keeps buying from Mr. Webber's store, yet everyone stays skinny?  Over the course of a week, the rest of us would have put on 20 pounds. 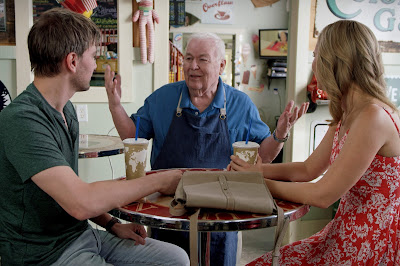 Riley is allergic to bananas, but Mr. Webber keeps forgetting.
Speaking of Mr. Webber, he asks Riley to fix his freezer when it stops working.  Without using any tools, Riley manages to fix it in two seconds.  If you've ever had an appliance repaired, you know it gets torn apart, and there's an enormous mess to clean up once it's fixed.  No greasy hands for Riley!

What Rating Would You Give "Romance in the Air?"

Cindy Busby always plays a down-to-earth character who is bouncy and likeable, and Torrance Coombs has the kind of eyes you can drown in.

I'm not sure I'd feel secure hooking up with someone who gave balloon rides for a living, but that's just me.  Those eyes have the power to convince a woman of anything though.
What did you think of the movie?  Share your rating below:
survey services

Our group chatters excitedly about all the Hallmark movies.  Join our online family!  We have contests, polls, trivia, and more.  Everyone is welcome!
Hallmark Seasons of Love Facebook Group

March 29, 2021
Starring:  Cindy Busby & Christopher Russell Released:  2021 Summary:  A photographer visits an isolated lodge in search of scenic waterfalls and other idyllic natural features to capture alongside her attractive guide. Image:  Crown Media Vote For Your Favorite Busby/Russell Hallmark Movie Fans loved Cindy Busby and Christopher Russell when the two paired up for 2020's Love in the Forecast , and so Hallmark Channel reunited them for a 2021 Spring Fling premiere.  It's the third Hallmark movie featuring Russell as a nature man who thrills female viewers with the rugged way he tames the wilderness and survives the elements--he's the epitome of masculinity. You may remember Love in the Forecast  was about a dairy farmer teaching a meteorologist how to predict the weather via nature rather than high-tech equipment. Love in the Forecast, Image: Crown Media Busby and Russell have become friends over the course of filming two movies together, and you can sense their comfort
Post a Comment
Read more

Hallmark's "Nature of Love," Glamping, and the Appalachian Trail

April 24, 2020
Starring:  Emilie Ullerup and Christopher Russell Released:  2020 Summary:    A city girls writes a magazine feature on a glamping resort.  Not being the sporty type, she manages to face her fears by trying the camp's activities with the help from a rugged outdoorsman and nature guide. Image:  Crown Media, United States LLC Had You Ever Heard of "Glamping" Before This Movie? When I read the plot summary for this movie, I thought there was a typographical error and that our heroine was actually going camping. Who knew glamping was a thing?  Maybe everyone but me? What is glamping ?  It's camping, but with more glamorous accommodations and facilities.  You can enjoy the great outdoors without roughing it.  Glamping provides the best of both worlds--the beauty of nature and the luxuries of a resort.  Sounds pretty perfect. Image:  Crown Media, United States LLC Where are the best places to go glamping?    Check out this list of the 25 b
Post a Comment
Read more