Take the Movie Quiz on Hallmark's "Country at Heart," Listen to the Song They Perform, & Hear What Fans Are Saying

Summary:  A struggling country singer stumbles across a Nashville songwriter in need of some inspiration, so they decide to work together to write a song. 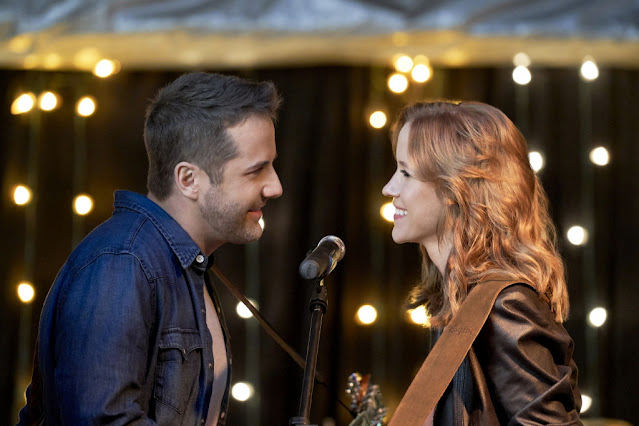 Needing a Hit is a Metaphor for Hallmark

Hallmark set the bar high by providing its audience with hit movie after hit movie for many years--until recently.  The year 2020 started strong with Winterfest and Love Ever After, but by Spring Fling, Romance in the Air, and the beginning of Fall Harvest, many of the premieres left viewers disappointed.

Some might blame the downturn on COVID-19, but the timing also coincides with the departure of Bill Abbott as CEO of Crown Media, who left early 2020 after serving 11 years.  Once Abbott left, Hallmark hurt its brand by becoming too politically correct.

Grady Connor's (Matter) career depends on him writing a hit song, as much as Duke Sterling's career hinges on a hot, new release.  Their dilemma could be a metaphor for Hallmark--Crown Media needs some hit movies before their base crumbles and ratings topple.
Looks like Hallmark finally scored with Country at Heart, but it bears noticing this movie had a delayed release and was filmed in August 2019 when Abbot was still at the helm.
As Fall Harvest wraps up and the Christmas movie season commences, we'll see if Hallmark manages to right the ship, or if the ship sinks.  Let's hope they stay afloat so we can all enjoy the cruise.

Here's What Fans Are Saying About Country at Heart

Unlike the barrage of negative fan comments following Follow Me to Daisy Hills and Falling for Look Lodge, fans had a lot of good things to say about Country at Heart. 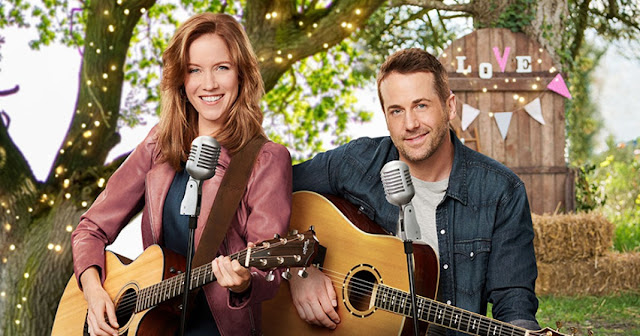 Image:  Crown Media
Although the majority of viewers said they loved, or at least liked, Country at Heart, not everyone was impressed.  Could it be that after the last few bombs, fans set the bar so much lower that anything decent could surpass sagging expectations?
Here are a few unique observations from fans that have merit:

Personally, I, too, laughed when Lucas Bryant kept tossing back the hair that frequently tumbled into his face.  This "boy band" behavior on an "old timer" wasn't attractive.
I would also add the storyline was a little stale, considering we've seen variations of it in past movies. In A Christmas Love Story, a youth choir director had to create an original song for their annual Christmas Eve show; Our Christmas Love Song was about a country music star accused of plagiarizing her mentor's hit; Jesse Metcalfe played a music star struggling to write new songs until he went home and found inspiration in A Country Wedding.
Hallmark writers need to think outside the box a little more and hire writers with fresh ideas.

Hallmark boasts a multi-talented ensemble of stars who are just good at acting--many have musical talents as well.
Country at Heart includes enjoyable hits that even non-country music fans can appreciate.  Here's the song, Right in Front of You, that Grady and Shayna "write" together.

January 16, 2022
The Wedding Veil Plot Summary   The Wedding Veil is the first installment of a new trilogy that follows three longtime college friends who discover a mysterious, antique veil fabled to unite its bearer with her true love.  After discovering a long-lost painting, museum curator Avery and new board member Peter investigate the artwork's origins as they plan a gala to unveil it. Starring :  Lacey Chabert, Kevin McGarry, Autumn Reeser, and Alison Sweeney Lacey always makes a beautiful bride!  Image:  Crown Media The Wedding Veil Is Inspired by Lori Wilde's Book Churning out tons of new movies each year takes a toll on Hallmark's creativity.  How many plots can be about a writer, and is it common for so many people to suffer from amnesia? Recycled stories grow wearisome, but when Hallmark taps authors outside their own bubble, fans benefit from fun, light-hearted romances that are refreshingly unique. The Wedding Veil  is inspired by the book, There Goes the Bride by Lori
1 comment
Read more

August 27, 2022
Image:  Crown Media Lacey Chabert Is a Hallmark A-Lister Before Candace Cameron Bure left Hallmark for Great American Family, fans would good-naturedly spar over who should be crowned the network's Queen of Christmas --Bure or Lacey Chabert.  Starring in more leading roles on Hallmark than other actresses, both ladies seemed to retain a firm reign over the network, evidenced by their massive viewing audience. All fans have their favorite Chabert movie, but there's no denying that A Christmas Waltz was the number one most watched original movie premiere in 2020, and in 2022, The Wedding Veil broke Hallmark viewing records by drawing in more than 3.3 million live viewers.  In fact, The Wedding Veil outperformed all of Hallmark's 2021 movies, proving Chabert's popularity shows no sign of waning. Surprisingly, as many familiar faces left Hallmark for Great American Family, like Jen Lilley and CCB, Chabert not only stayed with Hallmark, but she also signed a 2-year deal
Post a Comment
Read more

March 09, 2021
Starring:  Erin Krakow and Tyler Hynes Released:  2021 Summary:  A fiancee starts to question her life choices and puts her future engagement plans in doubt upon the arrival of her betrothed's free-spirited brother. Image:  Crown Media Do You Have Wanderlust? When Elizabeth Hall (Erin Krakow) returns to Echo Beach for her engagement party, hosted by George's mom, she questions whether or not marrying George (Giles Panton) might be a mistake. They have their dental practice in common, but aside from that, are they too different?  To be with George, the proverbial "stick-in-the-mud" who never wants to stray far from his dental office, Elizabeth must sacrifice her desire to travel and see the world.   When Elizabeth reconnects with George's brother, David Belling (Tyler Hynes), he manages to fan the flames of her wanderlust.  David reminds her of the note she'd written when she was 13 of all the places she wanted to explore in Italy.   bike trail guide Lightnin
9 comments
Read more

April 19, 2020
Starring:  Lacey Chabert and Warren Christie Released:  2014 Summary:  While consoling each other over the recent loss of their spouses, a man and a woman grow close and fall in love. Image:  Crown Media, United States LLC Gina Kell and Michael Spehn Find Love Despite Tragedy You've seen the movie, so you know the plot, but did you catch that it's based on a real-life story? Gina Kell's husband died on Christmas Day, 2005, from a rare and incurable cancer, leiomyocarcoma, which he battled for three years. Weeks later, Cathy Spehn died seventeen days after learning her painful headaches were a result of a brain cancer called glioblastoma multiforme. It's no wonder the two gravitated toward one another. It's like parenting--people who have never had children can't really grasp what life with kids is truly like on a daily basis.  Similarly, your heart can hurt for someone who has lost their spouse, but you can't relate to them on deeper l
1 comment
Read more

Take This Movie QUIZ on Hallmark's "The Wedding Veil Unveiled!"

February 15, 2022
The Wedding Veil Unveiled Plot Summary   Emma travels to Italy to teach and research a wedding veil said to bring its owner love.  While there, she meets Paolo, the son of a local lace-making family. Starring:   Autumn Reeser and Paolo Bernardini  Image:  Crown Media Fun Historical Mystery The second installment of The Wedding Veil trilogy is shrouded in mystery, and viewers are intrigued as the clues are pieced together to reveal a story worthy of a Shakespearean play. While in Italy teaching American art history, Emma uses her free time to research the origins of the enchanted veil.  As she embarks for the island of Burano, boasting more than a dozen shops specializing in handcrafted lace, she meets Paolo.  Emma's exploration leads her to one of the oldest lace shops on the island, and when an older woman tending the store sees the veil, she reacts excitedly in Italian.  Emma can't understand what's being said, but Paolo appears to interpret--the shop belongs to his fam
1 comment
Read more

February 24, 2022
The Wedding Veil Legacy Plot Summary Tracy is the last of her three friends to take possession of an antique wedding veil.  Will it prove to be magical for her despite her cynicism about its legend? Starring : Alison Sweeney and Victor Webster Image:  Crown Media The Trilogy Comes Full Circle but Leaves an Open Door Ask any Hallmark fan which installment of the trilogy they liked most and responses will vary.  All three were SO GOOD that it's really hard to pick a favorite.  Our Facebook group conducted an opinion poll on the matter, and most voters tapped Legacy as their top choice, followed by the first one , with Unveiled ending up in last place. We'll try another poll in this blog post to see if the ratings fall the same way. survey services In the first movie, Avery finds Arianna's portrait, only to later realize the veil in the portrait is the same Italian veil she bought from the antique store with her friends.  The second installment traces the veil's origins
Post a Comment
Read more

January 06, 2022
Where Your Heart Belongs Plot Summary   When a New York marketing executive returns home to help with her best friend's wedding, she learns the hard way that the love and support of family and friends means more than she'd ever imagined. Starring :  Jen Lilley and Christopher Russell Mackenize Finds Her Heart Belongs at Home Where Your Heart Belongs proves what we rural folk have known all along--big city living corrupts good morals! Mackenzie Sullivan is from the small town of Sweet Grove, but pursuing a marketing career in New York City for years while trying to stay ahead of her competition has blurred her boundaries between right and wrong. It takes spending time with friends and family to open her eyes to the person she has become, and she doesn't like what she finds.  She's a small-town girl at heart, and home is where she needs to stay in order to be truly happy.  It also helps that a drop-dead gorgeous man from her past lives there too. Jen Lilley's Char
2 comments
Read more

JOIN US ON SOCIAL MEDIA!