Summary:  When Callie returns home from her deployment, she finds her hometown has changed.  Her high school sweetheart has a new girlfriend, and her family's barbeque restaurant is struggling.  When she meets a marooned film director, they both learn how to look forward instead of back and find love in the process. 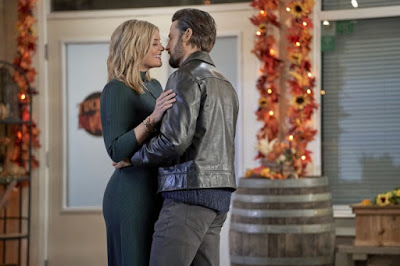 Just like Matchmaker Santa, this plot relies on a car breaking down and stranding out-of-towners indefinitely.  It's funny that Hallmark treats small towns like remote, third-world countries that have no access to modern conveniences or supplies.  Finding a replacement switch for a classic car might be a little more challenging, but any service garage could track one down in a day and have it shipped overnight.
Regardless, Tucker's Roadhouse shows Southern hospitality to Luke (Tyler Hynes) and Dan (Michael Teigen) by lodging them for the duration of their stay.
The best part of this movie is the Southern charm.  Callie's soft accent, the signature BBQ sauce, unique clichés, mountainous scenery, line dancing, and the slower pace allowing time for the characters to breathe is a nice contrast to other Hallmark movies where the leading lady is a frazzled, workaholic executive.

The humor in Roadhouse Romance is also subtle but well-integrated.  Hynes has a captivating way of speaking in the same conversational tone while dropping funny barbs into the mix.  The banter between the two characters is cute--Callie's never heard of classic sci-fi movies, and he knows very little about country music, aside from the fact they all are sad.
Lauren Alaina also sings two of her original songs in the movie, although they were not written specifically for Roadhouse Romance.  Alaina helped pick songs she'd already recorded that would fit the movie thematically, and the script was tweaked to make them work.
Roadhouse Romance is already available for pre-order, pending it's December 7, 2021, DVD release!  If you love it, you can find it here:
Unlike other military-themed movies Hallmark has produced, this one focuses more on a real issue deployed troops must wrestle with upon their return home--how much life has changed.  Time doesn't stand still, and soldiers can't time warp back to how things were and pick up from there.  They join the movie of life already in progress, and they have to find a way to catch up and cope with the emotional impact of bridging the gap.  For those of us who haven't served in the military, this is a powerful reminder of the sacrifice our brave, national heroes make for our freedom and safety.

What Did You Think Of Lauren Alaina?

Many Hallmark fans were impressed with Lauren Alaina's acting performance, especially considering she's only starred in one other movie (The Road Less Traveled) and competed on Dancing with the Stars.

I didn't care for her as a Hallmark leading lady, but you don't have to agree.  First, her real name is Lauren Alaina Kristine Suddeth, so shortening her professional name to just Lauren Alaina sounds weird.

Second, she's a pretty big girl for a Hallmark main squeeze, so her onscreen presence didn't match the skinny stereotype we're used to seeing.  When she hugged "Joe" upon her arrival home, he was too small to be playing opposite of her and looked like a little rag doll in her arms. Since these movies are escapism entertainment, I don't want to watch the same heavy people on Hallmark I can see at Walmart. 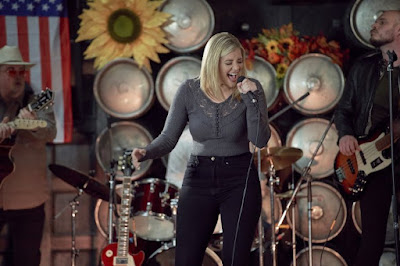 Her singing voice doesn't match her speaking voice, but there is no arguing about her obvious vocal talent.  She should stick with that.  If you loved her hit, Run, you can watch it here:

To Thine Own Heart Be True

A good moral to this movie is to be true to your calling.  Luke dreams of making feature films, but when one is dropped into his lap, he refuses to settle and attach his good name to a crappy script.  Callie loves being a physical therapist, and even though she's a mega talented singer, she has no interest in switching occupations.  Just because you're good at something doesn't mean it's your destiny.

Find Us On Social Media!

If you are a Hallmark movies fan, you can find us on a variety of social media platforms.  Our groups are unique because you are encouraged to share honest feedback on all movies.  Some groups function like thought police and will block you for not gushing about every movie and actor.  Our groups value freedom of speech.
Hallmark Movies-Seasons of Love Facebook Group
Hallmark Movies-Christmas Magic Facebook Group
Twitter
MeWe
Gab