Take This QUIZ on Hallmark's "Taking a Shot at Love"

Summary:  A former professional dancer is using ballet to help a hockey player get back on the ice. 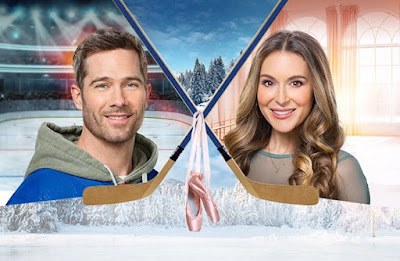 Ballet is such a delicate and overtly feminine art form that seemingly has no place for excessive testosterone from buff athletes, but if men can dodge the jabs, jeers, and stigmatization, it offers them a unique form of cross-training to give them an advantage over their competition.
What do you think of Luke MacFarlane in ballet shoes?  He's still a hunk!
Ballet improves an athlete's agility, coordination, flexibility, balance, footwork, core strength, and lateral movement.  Learning the jumps in ballet is extremely cardiovascular.  With it's precise movements, ballet strengthens muscles and tendons a person might never use otherwise.  This is beneficial, not only to hockey players, but to those involved in karate, soccer, basketball, baseball, and football.  The bodily awareness athletes gain from ballet leads to greater self-control and self-discipline out on the field, especially as it relates to quick starts and stops as they easily shift their center of balance.

Which Movie Line Do You Agree With More?

An air of mystery surrounds Jenna's departure from professional dancing.  Every time Ryan broaches the subject, Jenna pivots or they are interrupted.
Jenna experienced the same injury as Ryan, and while she was unable to perform, her boyfriend, who was the creative head of their dance company, replaced her with her understudy.  To make matters worse, he and the understudy were engaged a year later.
Rather than continue her professional dancing career with all those painful memories, Jenna shifts gears and opens her own ballet studio.
When Jenna asks Ryan what his back-up plan is if he can't return to hockey, he replies:

Back-up plans are for people who expect to fail.

Based on her own personal experience, Jenna has a different take on having a Plan B action plan ready.  She argues,

Back-up plans are for people who know even if they do everything right, sometimes things change that they can't control.

Fun Movie, But These Two Scenes Are Laughable

At one point in the movie, Ryan puts "tu and tu" together and realizes he had seen a professional performance of Jenna's dance company four years previously when he first started dating his ex.  He whips out his phone, and BOOM, the picture is right at the top.
Come on.  People take pictures with their cell phones at breakneck speeds.  A picture on your phone from four years ago would take a ton of scrolling to find.
When Ryan checks on Jenna during the power outage, she invites him to sleep on her couch for the night, since the living room is the only room with heat.  They fall asleep while a million candles burn throughout the house.
Who does that?  We've all heard the horror stories of houses burning down from a single unattended candle.
Regardless of those two unrealistic scenes, the movie is fun.  There is a lot of playful banter between Ryan and Jenna, like when he makes fun of the arduous process she goes through to make her own coffee.   When she offers him a to-go mug, he asks if it first had to made on a pottery wheel!
The movie is also sweetly poetic.  Jenna helps Ryan heal physically, and he helps her heal emotionally.

Hallmark Facebook groups are plentiful, yet they are all uniquely fun.  If you haven't joined ours yet, we welcome new members!
🎄 Hallmark Christmas Move Magic Facebook Group 🎄
💖 Hallmark Seasons of Love Movies Facebook Group 💖